Piriform CCleaner review 2022: what does the cleaning tool really do?

Many computer owners are familiar with the problem: Over time, their computer becomes slower and slower and errors are reported more and more often, even though everything should be running smoothly. There is a simple reason for this: The hard drive has become quite simply too much garbage accumulated, which slows down the performance of the computer unnecessarily. This problem can be solved relatively easily with a cleaning program.

The most popular tool is the CCleaner, which is available for download as freeware for private users. But is it rightly the most popular tool? This program offers the user a lot more options than deleting unnecessary files from the hard drive. The paid program also offers features such as automatic program updates, adjustable cleaning routines or individual monitoring.

We took a closer look at the provider and show whether this is really a useful cleaning tool for the computer and which is the best alternative.

What is the CCleaner?

Users whose computers run on the Windows operating system have always been using the CCleaner. This is extremely popular because users hope to be able to speed up their computers. Today's CCleaner appeared under the name Crap Cleaner 2004 primarily to clean up data. In the following years, however, the application was supplemented with functions that go beyond this.

The main job of the cleaner is to delete files that are no longer needed and temporary files, as well as the browsing history. This also includes making the memory files more numerous Speed ​​up applications.

Further functions in the CCleaner free version are:

What is the difference between the free and paid versions?

In addition to the free version of the CCleaner, Piriform also offers the program in two paid versions on. There is also a so-called trail version of these, with which all functions can be used for a limited time.

In order to be able to use the application permanently, the user must have a Annual subscription complete, which costs 25 euros. The license must then be renewed every year. As an alternative, there is also an automatic subscription renewal. In this case, the subscription may have to be canceled. 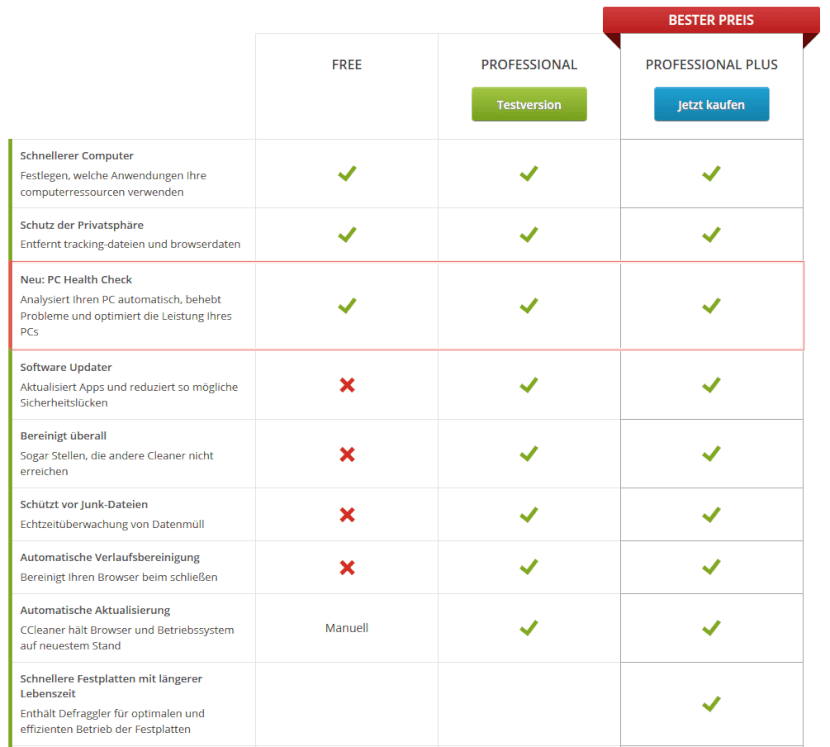 Downloading and using the CCleaner

First of all, the visitor will find an installer on the manufacturer's website to download the CCleaner and start the free installation. However, during the installation this installer tries to do other things like Toolbars to install on the computer. Under the heading "CCleaner builds“Visitors will also find downloads for CCleaner Slim and CCleaner portable.

The CCleaner Download is available in both a 32-bit and a 64-bit version. Users who still use a 32-bit version of the Windows operating system should also opt for the latter.

Once the program is installed, the user can select the options to open the Change the language to German. The names are then changed immediately, and CCleaner convinces with a very good translation.

The transmission of anonymized data to Pirisoft can also be done in the options in the submenu "Privacy“Be prevented. And the CCleaner leaves nothing to be desired in terms of clarity. All main functions are arranged in the program window on the left.

A cleaning tool not only for Windows

Because the CCleaner is extremely well known, Piriform also has variants for the Mac and the operating system Android developed. That means: The CCleaner can also used on mobile phones become. The cleaning program for Android devices is available from Google Play. This offer is also free of charge for the user of the Ccleaner and is financed exclusively through advertisements.

The CCleaner German is basically the same for the Mac as the version for Windows and has a similar functionality. Things that are Windows-specific are of course missing here. This includes the possibility of Registry optimization.

The Ccleaner Cleaner: The heart of the program

The user can find the option of deleting superfluous files, the most important task of the application, in the “Cleaner” area. There are two tabs labeled "Applications" and "Windows":

More functions with the CCEnhancer

Because an extremely active community had built up around the CCleaner, the number of applications whose data garbage is detected and removed has grown steadily in recent years. In the meantime, the CCEnhancer, which is also available free of charge, has taken over this role and is maintained by numerous users. This tool expands the spectrum of the CCleaner more than 1.000 programs.

Using the CCEnhancer is very easy. As soon as the tool is designed, the user only has to press the button "Update rules“Click. Once this download is complete, the program will download a file called "winapp2.ini". This contains the rules for further programs. This data is passed on from the CCEnhancer to the CCleaner.

If the path to the respective program is unknown, this can also be entered manually. These new programs are then also available in the applications under the section "Cleaner“Is displayed. The cleaning program now also recognizes superfluous and temporary files from these programs and can delete them.

One of the functions of the CCleaner is the ability to check whether Error in the registry database and to clean them up. However, a cleaned registry does not accelerate the computer. And possible errors cannot be corrected either.

On a cosmetic cleaning of the registry Users should do without their computers because they might even cause more damage. Because the CCleaner only deletes entries that belong to files or programs that do not exist. However, if entries have an incorrect value, this is not corrected.

Users will find numerous other functions under the “Extras” section. This includes, for example, the "Software update". This shows which of the programs installed on the computer need to be updated. This task is automatically taken over by the Professional Edition.

This function is basically an uninstaller for programs that are installed on the hard drive. The user can not only rename and uninstall entries, but also broken installation entries that have been left behind, repair and delete.

This will display all autostart entries. The user also learns where these entries are started. This can be done via the autostart folder in the start menu of the operating system or via the registry. The user has the option of making entries to activate and deactivate, but also to delete.

In the Autostart area there is the "context menu". Various additional programs such as 7-Zip or VLC, which are integrated in the Explorer, are displayed above. Here, the user has the option of activating, deactivating and deleting these entries and calling up the registry paths responsible for the respective entry.

If the user selects this function, he has an insight into all tasks that are carried out in the Task planner entered are. He can also edit or delete them. Extensions of the respective browser as well as helper objects are shown by browser plugins. Here, too, it is possible to activate, deactivate or delete individual tools.

If the user selects this function, he has the opportunity to analyze how the memory occupied by data carriers are. In addition to various categories, he also selects the data carrier that he would like to examine and is shown how many files and which file types the data carrier contains. There is also the "file search". With their help, it is possible to find files that meet a certain property, such as a minimum size.

The user can switch to various points in the system recovery here and also delete the existing ones. However, it is not possible to use the CCleaner's own system restore points to apply.

In the “Extras” section, the user will find the hard disk wiper a practical tool if he has a whole Erase data carrier completely and securely would like to. Either the free memory or the entire data carrier is overwritten - sometimes multiple times. This is the only way to guarantee that the stored data will actually be deleted.

When is the paid version worthwhile

Compared to the free version, the paid version of the CCleaners offers a few new and improved features:

The Professional Edition offers an update at regular intervals so that new versions can be downloaded directly from the manufacturer's Piriform website.

Does the Piriform CCleaner pose a threat?

Numerous reports can be found on the Internet in which there is a warning against using this application. Some authors even describe the CCleaner as dangerous. However, the fact is that every user of the CCleaner completely safe can use

Because unlike numerous tuning suites, the CCleaner does not change any settings in the operating system or activate "tuning tips" or "tweaks". The CCleaner, on the other hand, deletes extremely carefully, which can already be seen from the fact that some areas are grayed out.

Only the registry cleaner should not be used by users. Because this improves the performance just as little as it fixes errors. On the contrary, errors may even be caused if entries that are still needed are accidentally deleted.

The support from Piriform 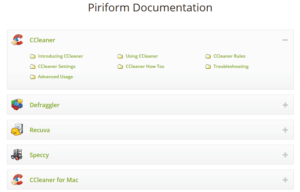 For users who have questions or problems, Piriform offers a support area, however consistently in English is. Users should already find the solution to many problems in the extremely extensive FAQ area. In addition, in the “Documentation” area, Piriform offers the possibility of viewing a manual about the various functions.

There is also a Forumin which questions are quickly answered by the community. Various video tutorials about the functions and their use can also be found on YouTube.

The Piriform support team can only be contacted by users who are interested in the paid variant have decided. The reason: Users who only use the free version do not receive the login data for the support area.

The pros and cons at a glance

These are the advantages and disadvantages of the CCleaner at a glance:

The conclusion to the CCleaner

The CCleaner is a clearly designed tool, which can be a real help when it comes to deleting files. Only Windows 10 offers the possibility to optimize the storage space, which makes the tool superfluous for this operating system. Especially in cooperation with the CCEnhancer, the CCleaner shows its full strength, because the applications of the cleaning program are expanded. The other functions apart from the hard disk wiper are already available in Windows in a different form. You should also avoid the registry cleaner.

The paid version is particularly convincing due to the possibility of installed programs update automatically and the browser data automatically clean up. The purchase is therefore worthwhile for users who want to use these features. Only the subscription model for the paid version may put off some users.

What free alternatives to the CCleaner are there?

What many do not know: As with Windows 7 and 8, Windows also offers options for Windows 10 to create free space on the hard drive. Up until Windows 8 that was mainly that Disk Cleanup, although the options here were very limited.

With Windows 10, the memory optimization introduced. This offers considerably more options for cleaning up the data carriers. Files that are no longer required are also automatically deleted.

The replacement for Windows Disk Cleanup is the Cleanmgr + tool. This will, however no longer developedsince Windows 10 was released. In the future, it should even be completely eliminated. The tool offers the same functions as Windows Disk Cleanup and some extras. For example, the cache of the Opera, Chrome and Firefox browsers can be deleted.

Bleachbit is also available free of charge. The interface is a bit confusing, but the tool that can be used to delete unnecessary and superfluous files is quite powerful. Not only Windows and the common browsers are taken into account, but also other programs such as Adobe Reader or VCL. A shredder is used for the secure deletion of data and data carriers.