Most of you have probably already heard of the VPN giants NordVPN or ExpressVPN, who draw attention to themselves with large advertising campaigns and offer a good service that also comes at a price. CyberGhost VPN on the other hand is one of the lesser-known providers who have set up an equally strong server network and offer this at a price that is far cheaper than that of the competition.

The question remains whether CyberGhost VPN is as trustworthy and secure as the market leaders. We are addressing these and other questions today Review in the menu.

CyberGhost VPN - Who is behind the VPN service?

CyberGhost VPN is a company that has been in the industry for many years. CyberGhost is an online security company based in Bucharest, Romania. The company's main business revolves around Internet security and privacy. In addition, the company publishes free browser extensions that work on the basis of blockchain technology. The company was bought by Kape Technologies, a technology company based in Israel.

Although the company is one of the lesser-known providers, it can still boast an impressive global server network that does not have to hide from the competition. With over 6100 servers in more than 89 countries CyberGhost VPN is one of the bigger providers when it comes to things VPN provider.

To connect, all you need is the software. With the help of the client, you can log into all servers in the provider's network after setup, both at home and abroad. The assigned IP address is that of the VPN server and does not come from your own Internet service provider. This means that foreign streaming services such as Netflix USA can also be accessed from Germany, which is not possible with a normal connection without VPN.

Thanks to the large server network, the ideal streaming server can be found quickly. According to the provider, most streaming services can be received all over the world, including:

Of course, the providers of the major streaming services try to block VPN access in order to be able to maintain a country-specific offer. Therefore, with VPN providers with a smaller server network, it can happen that they are actually blocked by the streaming platforms. Due to the large number of servers and the focus on optimizing streaming services, CyberGhost VPN is still able to access all services of the streaming or live TV providers. In our tests we hadr no problems, all of our selected streaming services can be reached quickly and easily.

By the way: The use of a streaming service via VPN is completely legalso that users do not have to worry that their use could have legal consequences. The only thing that can happen is that the IP address is blocked. In that case, however, you can simply choose a different server in the same country.

Which devices does CyberGhost VPN support? 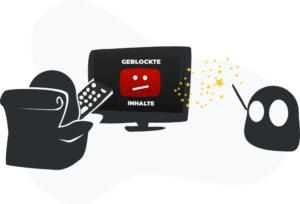 If this is not enough for you, you can connect his router to the service, so that all connected devices have access to the VPN network. On the provider's website, you can find all the information you need to install and compatible some router models. In addition, less common devices such as the Raspberry Pi, Synology NAS and VU + Solo 2 can be connected to the VPN service.

The best thing about the offer, however, is the fact that it has a single user account connected to seven devices at the same time can be. So you only have to pay once to give the whole family a truly limitless and, above all, secure Internet.

How secure is CyberGhost VPN?

Of course, security and anonymity are the deciding factors when choosing a VPN provider. The company headquarters in Romania offers some advantages here, since the laws of the country regarding data storage are not as strict as they are known from Germany and the company not legally obliged to do so is to publish the records of their customers - even if these are government institutions.

This alliance is the union of the following countries: USA, Great Britain, Canada, Australia, New Zealand, Germany, France, Israel, Sweden, Italy, Japan, Norway, South Korea and Turkey. The aim of this alliance is important Exchange information with each otherwhich more than endangers privacy and anonymity on the internet.

It is therefore of enormous importance that the VPN provider also strict no-logs guidelines which includes the deletion of personal data so that no conclusions can be drawn about behavior on the Internet. CyberGhost VPN is very transparent here and has very strict no-logs guidelines. If you want more information about data security, you can find out more on the provider's website.

The data encryption at CyberGhost VPN

In addition to the location and transparent, secure data protection guidelines, the last thing that has to be done is of course the right technical infrastructure to ensure safe and anonymous surfing. CyberGhost VPN uses a AES-256 encryption, which is considered to be one of the safest and used by governments and military around the world. A hacker attack is as good as impossible. CyberGhost VPN also offers a number of other functions that ensure security when surfing:

The speed at CyberGhost VPN

In our speed tests, the VPN service from CyberGhost convinced across the board. Regardless of whether you choose the domestic server in Germany or a server abroad, the upload and download speeds as well as ping remain relatively fast, so streaming shouldn't be a problem - no matter where you connect.

This is very impressive since Usually VPN connections reduce the speedbecause the connection is routed through several servers around the world. Hence, the increase in speed is something that even we really didn't expect before our tests. The high speed abroad, on the other hand, can be explained by the enormously high number of servers, which enable the provider to provide many servers that are underutilized in order to guarantee the fastest possible connection. 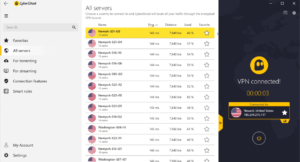 The setup of CyberGhost VPN is very easy and takes less than five minutes.

Step 1: The download can either be downloaded directly from the provider or, for mobile applications, from the web stores.

Step 2: You can start immediately after a successful download. The only thing that has to be done is to select the right server, for example a streaming server in the USA, in order to be able to access the Netflix program there.

Anyone who has never dealt with VPN connections before may have reservations and wonder whether a VPN connection requires a high level of technical knowledge. These fears are completely unfounded as there are really everyone can find their way around within a few minutes.

The CyberGhost VPN user interface provides this very clear menu. You can either access all VPN servers or choose only those servers that specialize in streaming services or torrenting - both are possible without restrictions. The server overview is also very simple and clear. In addition to the distance to the server, its load is also displayed so that you can easily access the servers that guarantee a fast connection.

Does CyberGhost VPN work in China?

Many people who are planning to travel to a country that is known to block some content on the Internet and thus make it inaccessible to locals, set up a VPN connection before leaving in order to bypass these country blocks. The best example of this is China. The so-called Great Firewall of China prohibits access to a large number of pages, as one is used to in Germany. If you are in China, with the exception of Hong Kong or Macau, it is therefore not possible to use Google's services or to access social media such as Facebook or Instagram.

Unfortunately it has to be pointed out that CyberGhost VPN at the time of the review offers no possibility to use the service in China yourself. Foreign VPN providers have been known to be blocked and CyberGhost VPN is no exception. If you are looking for a VPN connection for traveling to China, you should look for another provider, e.g. NordVPN look around.

The cost of CyberGhost VPN

CyberGhost VPN's offer is very cheap. The provider offers a excellent price-performance ratiowhat seeks its equal and puts the competition in the shade.

What also distinguishes the offer is that 45 day money back guarantee. This means that users can put the program through its paces during this trial period without having to commit to long-term commitments. However, the first 45 days are not a test version - users have access to all functions and extras, without reducing the speed. There are also additional offers, such as a dedicated IP address, which is not cheap at 5 euros per month and should really only be used by users who absolutely need this service.