Almost no other nation in the world attaches so much importance to data protection as Germany. According to some surveys, a large proportion of people pay attention to what data they reveal online. While this is a good basic requirement for safe surfing, it is nowhere near enough. Hacker Attacks and Cyber ​​Crime are on the advance - there are more than 800 million malicious programs worldwide and new headlines overtake us every day from hacker attacks and malicious software that spy not only on companies but also on individuals.

It is therefore no wonder that more and more people are liking to private security companies VPN provider that ensure safe and anonymous surfing. A VPN connection makes it possible to connect to the encrypted server connection of the VPN provider instead of the regular Internet connection, so that no traces are left behind when surfing. A trustworthy VPN provider does not save any user data, so that no conclusions can be drawn about the identity or the internet activities.

Given the abundance of VPN providers, the question arises as to which VPN connection is the most secure and what to look for when choosing the right provider. In order to remedy this problem a little, we present the provider's VPN service in this review ProtonVPN in front. ProtonVPN is a Swiss company that not only offers secure VPN connections, but also encrypted email services. Everything about the company and the VPN service in the following review.

Proton Technologies AG is a Geneva-based company that, despite its relatively small size, has already played a pioneering role in terms of data protection and security on the Internet. The company was founded in 2014. Scientists, engineers and programmers at CERN teamed up to create ProtonMail, the first Proton Technologies product that is now recognized as one of the world's largest encrypted email service applies. ProtonVPN said it was born out of the need to better protect the online activities of journalists and activists who were already using ProtonMail.

Proton is very offensive when it comes to the subject Transparency and security goes. Detailed information on the provider and its employees can be found on the provider's website. Proton is also committed to strict no-logs guidelines. This means that personal data and logs are not stored in order not to allow any conclusions to be drawn about the Internet activity of the users. If you would like to receive more information on the subject of data security, you can find out more on the provider's website.

Furthermore, Switzerland is not a member state of Fourteen Eyes Alliance. This alliance is the amalgamation of different countries that exchange information with each other - Germany is one of them.

ProtonVPN's server network is with 785 servers in 48 countries in contrast to server giants such as NordVPN or CyberGhost, rather manageable. However, the network offers a very high security standard, which offers sufficient protection against data leaks and cyber attacks of all kinds.

In addition to the issue of security, a VPN provider Of course, provide a fast internet connection to ensure maximum user-friendliness. In general, it cannot be avoided that a VPN connection is always accompanied by restrictions on the connection speed, since the connection is channeled through several servers. While many other providers rely on quantity instead of quality in their server network, ProtonVPN, on the other hand, offers a smaller network, which is only from High speed servers consists.

In concrete terms, this means that the minimum bandwidth is 1 Gpbs, with many servers able to achieve peak values ​​of 10 Gpbs. Of course, the speed depends on many individual factors, so everyone should test the software themselves without obligation. In our tests within Germany, ProtonVPN was able to achieve a acceptable speed regardless of whether we have used VPN servers at home or abroad.

In addition to anonymity and security when surfing, many people opt for a VPN connection in order to have access to streaming services abroad. With ProtonVPN, users can access services such as ABC.com, Amazon Prime Video, BBC iPlayer, ESPN +, Hulu and of course on Netflix access abroad. The services in the USA, Great Britain, Italy and Germany can be accessed for Netflix alone.

Usually, VPN providers are a thorn in the side of streaming services such as Netflix, Hulu or Amazon Prime, as they enable users to access the world's cheapest offers from providers. However, Netflix and Co. have their costs and theirs Offer on the respective market tailored. For example, the price offer and the selection of films from Netflix Germany is different from the offer from Netflix in the USA.

More information about streaming and Country blocks can also be found on the provider's website.

ProtonVPN offers its service for almost all operating systems on. These include Windows, macOS, Linux, iOS and Android. If you want to use your VPN connection primarily from home, it is recommended to connect ProtonVPN to the router, as this will secure and encrypt the traffic from all devices. This means that even devices that do not support a VPN connection can be protected.

But here's an important note: Not every router can be connected to ProtonVPN. Only routers that allow OpenVPN as a client can be connected. In addition, you should bring a little technical knowledge with you: Setting up ProtonVPN on individual devices is very easy, but requires a little more skill when connecting to the router. Here it is worth looking at the provider for more information and, if necessary, contacting ProtonVPN's customer support.

The cost of ProtonVPN 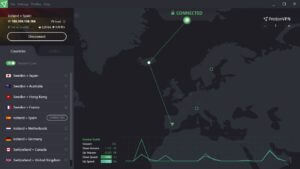 To say it in advance: ProtonVPN offers one of the most secure and trustworthy VPN networks, but that also has its price. Proton VPN is divided into four offerings: Free, Basic, Plus and Visionary

As the name suggests, this is one free VPN service. This offer is aimed at all interested parties who would like to familiarize themselves with the provider and the user interface before concluding a paid contract.

Certainly not bad for casual use, however nothing for long-term use.

The basic offer is for a one-year term for 4 Euro per month available. Here a user account can be connected to two devices, which has full speed access to servers all over the world. P2P services are possible, but even with this offer it is not possible to access the streaming services abroad.

The plus offer is with 8 Euro a month twice as expensive as the basic version, but an extensive service package has been put together that justifies the price. First of all, up to 5 devices can be linked to one user account. This means that a family household can usually get by with a single subscription. With the Plus offer, users really have access to all of the provider's servers, so that streaming services can also be used. Plus users also enjoy the highest level of security protection thanks to the Secure Core Servers.

It remains to be mentioned that the relatively expensive price by a two-year subscription can be reduced. For example, if you opt for a Plus subscription with a two-year term, you would pay EUR 6.63 instead of EUR 8 per month.

If the Plus offer is still not enough for you, you can get even more security with Visionary, but the price difference is considerable. An annual subscription costs here 24 Euro a month - three times as much as the plus service. In addition to all the Plus functions, Visionary also includes access to ProtonMail Visionary, the security company's encrypted e-mail service.

Anyone who is still undecided can test all paid offers risk-free. For this, ProtonVPN has its customers a 30 days money back guarantee granted.
To the ProtonVPN website

This makes sense because the basic version is not suitable for fully checking all functions of the program. Instead, it is worthwhile to take out a one or two-year subscription and, if you are dissatisfied, cancel it within the first month. If you only need the offer to circumvent the restrictions in countries with Internet censorship, you can sign a one-month contract, which is a little more expensive.

Our personal experiences with ProtonVPN are more than just convincing - The provider offers an excellent VPN service, which is in no way inferior to the large providers in terms of security and service.

In view of the still relatively small server network, some will perhaps think twice about getting an equivalent streaming service from other providers for almost half the price. However, the Security aspect that makes ProtonVPN so unique.

Despite these shortcomings, we can use ProtonVPN Recommend without reservation. Here it is particularly worthwhile to test the one or two-year Plus Service, as it includes a comprehensive range of security and services. The free package is only recommended for those who want to get an exact picture of the user interface.

Proton Technologies AG is one of the most trustworthy providers and offers the best security package at a price that is unfortunately a bit too expensive. It remains to be seen whether the flood of new subscribers can keep prices down. If so, Proton could strive for market leadership in the long term.