NordLocker cloud encryption: the advantages of the encryption solution

NordLocker is an encryption service that above all specialized in cloud services is. The offer comes from NordVPN, which we already know as the most popular VPN service. The developers have now come up with something new and are launching another security tool, NordLocker.

The tool is a cloud service with Zero-knowledge encryption. This allows customers to encrypt their data before uploading. First the data ends up in an encrypted safe. This can then only be opened by entering the master password.

The new service from NordVPN is the answer to the demand for useful Security tools. After all, the number of threats on the Internet is also growing rapidly. Of course, users want to protect themselves accordingly from these cyber attacks. NordVPN is working on a number of new security tools, NordLocker is now available for download.

There is one to try out free version. There is also a paid version for everyone who wants to use the full service in its entirety. For the paid version, however, users then need a customer account with NordLocker. If you are already a NordVPN customer, you can connect this customer account to the NordLocker service and save yourself the log-in.

How does the encryption tool work?

The NordLocker encryption is a tool for files and folders. The service is available both for Windows users, as well as for macOS fans.

To the NordLocker homepage

The use of NordLocker 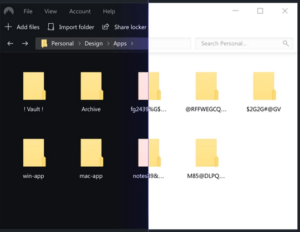 As soon as the customer account has been created and the password has been assigned, the customer has access to the portfolio. The operation of the program is designed to be intuitive, so that even beginners should not have too much trouble encrypting their data. In the main menu, customers can add their files and folders to the encrypted area, i.e. to the locker.

The NordLocker functions also include a Sharing service: Here, NordLocker customers can network with each other and share their data. This is particularly useful when you want to share encrypted files with other users. To share, you need the recipient's email address. However, sharing of the backed up files and folders only works if the recipient has also installed the NordLocker Client.

The security at NordLocker

As a customer, you naturally want to know how exactly the security of your data and folders is guaranteed:

In short: Here comes the End-to-end encryption with zero knowledge standard to carry. The files are first encrypted on the customer's device before they are sent to the cloud. Quite similar to the popular BoxCryptor service. 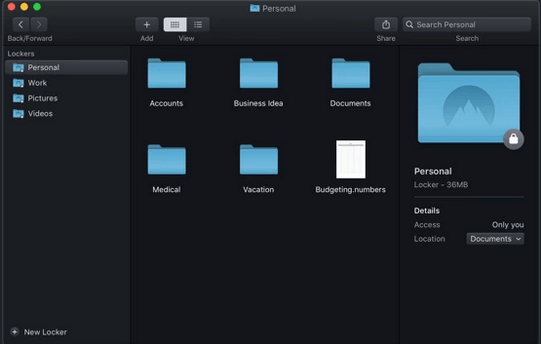 The prices at NordLocker

Of course that is free version from already quite interesting. For example, customers can encrypt up to 2 GB and even connect the service to OneDrive's cloud storage.

But if you want to use the entire spectrum of the offer, you should switch to the paid version. Because the premium version has unlimited storage.

But attention: The offer can only be used via the desktop version. A version for Android or iOS is not yet available.

The conclusion to NordLocker

In our NordLocker test, we were able to take a closer look at the new security tool from NordVPN. Customers now not only have NordPass as additional security measure available, but also the NordLocker encryption service.

So far, NordLocker is exclusively as a desktop version available, the mobile version for iOS or Android does not yet exist. In comparison, the NordLocker price is in the same range as BoxCryptor, so it is available for annual double-digit amounts.

The free version offers encryption of up to two GB. If you want to encrypt more data or share encrypted data, you should access the Premium version change.

To the NordLocker homepage